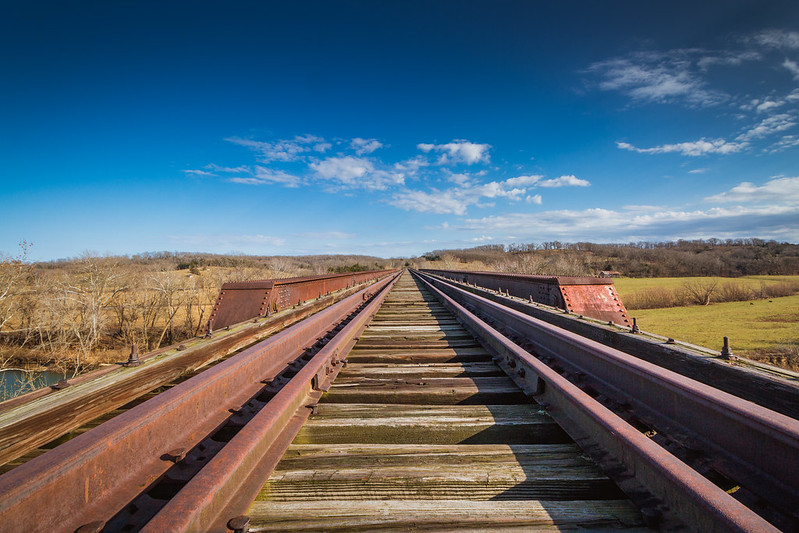 The hard it is to reach a location, the more I want to try and see it.  The Rock Island Bridge over the Gasconade River has been at the top of my list since I moved back Rolla, MO a year ago.

This train bridge, built by Chicago, Rock Island and Pacific Railroad in 1903, is the longest internal bridge in Missouri.   This stretch of railroad was known for transporting wealthy patrons from St. Louis to the Ozarks for hunting and fishing expeditions.

My dual sport motorcycle riding buddy and I initially tried to reach the bridge from the east, via the ghost town of Gascondy, Missouri. Halfway down Marie County Road 718, we encountered a massive gate blocking the road.

As we contemplated how we were going to navigate this obstruction with the motorcycles, the farmer from the nearby farmhouse came screaming up in a decked out UTV.  After his initial period of extreme combativeness, I was able to get him calmed down enough to get some information out of him.  He insisted the road was now owned by him (I have my doubts) and he was admit the bridge couldn’t be reached, legally, from either side.  We stayed and talked with him a while and learned some of the history of Gascondy.

We left and made our way north to the nearest road bridge and then south again until we reached Freeburg, Missouri.  After stopping to see the abandoned train tunnel that runs under the city, we made our way down to the bridge.  The bridge actually runs through the middle of the Hilkemeyer family’s land.  Signs are posted that access must be requested via the Hilkemeyer General Store in Freeburg.

Although we hadn’t requested permission, we found an open trail leading to the bridge.  After parking our motorcycles, we started walking the trail.  Shortly after leaving the motorcycles, two men exited the woods and stopped us.  The older guy told us his son was currently hunting farther down the trail and we couldn’t continue.

He was extremely nice to us even though he had caught us dead to rights trespassing on his property.  After talking for a bit, he gave us permission to ride through his property and down to the bridge.